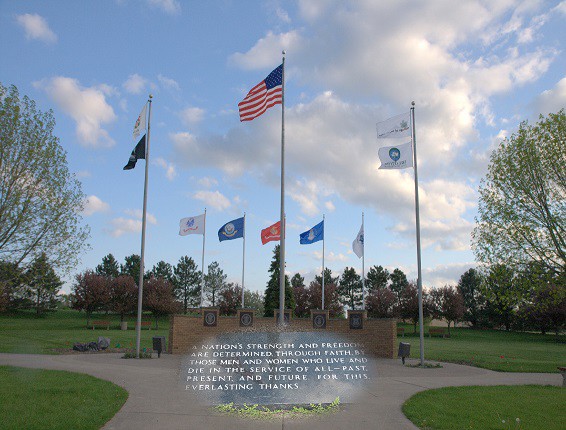 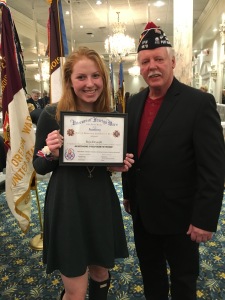 This year’s theme was “Why My Vote Matters.”

Our Post winner is Ms. Brin Driscoll, a senior from Downers Grove North High School, pictured here with Post member Bob Reichert at the VFW 19th District Awards Banquet on January 12th.  She is on North’s Golf Team, has may interests in community service and plans to further her education with a Business Degree.  Right now she is looking at Purdue and  the University of Missouri.

Conducted nationwide, this VFW-sponsored youth essay competition for sixth, seventh and eighth grade students, gives them an opportunity to write essays expressing their views on an annual patriotic theme. The National Association of Secondary School Principals (NASSP) has again approved this contest for its National Advisory List of Contests and Activities.

So on Sunday, January 13th, Post 1578 held our own Patriot’s Pen Award Party at Shanahan’s!

Our winner from St. Scholastica is Ruchelia Lieu, with a score of 95%.

Our six winners from Jefferson are:

Based on these scores, our Post winner is Anjali Kota.  Both she and Ruchelia received a $50 gift certificate. 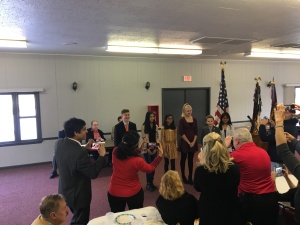 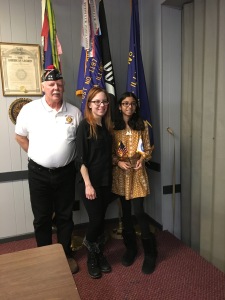 “Why I Honor the American Flag”

On Sunday, January 27th, VFW 19th District held their annual Patriot’s Pen Pizza Party.  This year’s event was held at Batavia Overseas Post 1197.  Our Post winner, Anjali Kota, was one of 24 other Post winners in attendance.

With over 2,200 participants in the 19th District, Anjali placed 3rd overall.  She was awarded another Certificate, a Flag Desk set and $200.00!

OUR EMAIL ADDRESS IS
woodridgevfw@gmail.com